The Borders Classic Bike Show
Thanks for visiting the site, we hope you find it useful and we also hope to see you at the Show this year. 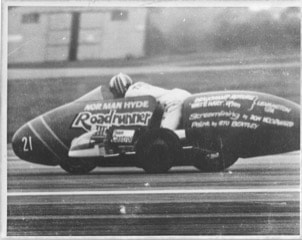 When Norman Hyde quit his apprenticeship at Avery Scales and joined Triumph Motorcycles at Meriden, it set his life in a direction he still follows. At Triumph in the 60s and 70s his talent as an engineer and draughtsman was soon recognised by Doug Hele, one of the best development engineers to ever grace that industry. Hele appointed Norman one of his closest associates and let him work with the development team that refined the company’s best selling machines into race winners; the first production machine to lap the Isle of Man TT course at over 100mph was a 650cc Triumph Bonneville, ridden by Malcolm Uphill. When the racing effort switched to the three-cylinder 750ccTrident, their machine known as ‘Slippery Sam’ won five Production TT races, ridden by a number of riders, and was only retired because race regulations forbade the entry of machines more than five years old.

Back in his garage at home, Norman was spending his spare time developing his own very special Trident. Using parts that were almost all rejects from the production line, he built a supercharged sprinter that he fitted with a miniscule sidecar and a streamlining panel-beaten by ex BRM Formula One craftsman Don Woodward and set out to capture the World Sidecar Speed Record. Very few people realised that when he pointed the outfit down the long runway at Fairford in Gloucestershire in 1971 and gave the engine the gun, he had not ridden the machine with the full streamlining fitted. Covering the kilometre with a flying start, he hit over 160mph and then  found that the teeny Tiger Cub front brake fitted for lightness could not do much to slow the streamlined outfit from such a speed. He ended up on the grass at the end of the runway and lay on his back trying to calm down as his crew turned the Trident around and checked it was ready for a run in the return direction; World records have to be set with a run in both directions. Norman was up to the task, whatever the stopping problems his first run revealed, and he set the world record at a new high of 161.5mph. It was an extraordinarily brave ride and his record remained unbroken for 35 years. 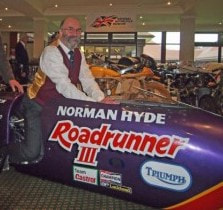