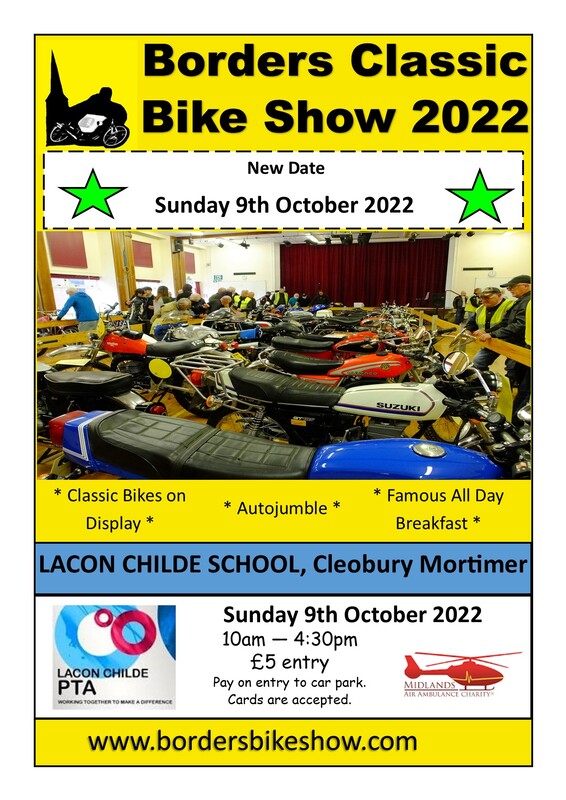 What time does the show open?
10am

Where do I buy tickets?
​Tickets are purchased at entrance

What is the ticket price?
£5 per person

Can I sell bike parts at the show?
Click here

Can you show me where it is on a map?

The Borders Classic Bike Show is organised by the Lacon Childe School Parent Teacher Association (a registered charity). The proceeds from the show go towards fundraising for the school.
This year, the show is also raising money for the ​Midlands Air Ambulance. 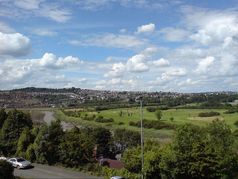 Caerleon, Wales
It all started back in the mid 1980s, when I travelled down to Caerleon in South Wales to what sounded like a decent bike show. What I found was the origin of the species, because the Ponthir British MCC held their first Classic Show before Alan Whitehead got going at Belle Vue in Manchester - you have to remember that this was years before the big show moved to Stafford. At Caerleon it was in the local comprehensive school and the turn-out was impressive; they made money for the organising club and for the school too. I came home full of enthusiasm for what I’d seen and the germ of an idea in my head - why not have a show in Cleobury Mortimer?

My much better half was the recently appointed Deputy Head Teacher and when we discussed the idea she could see the potential. We had a meeting with Head Teacher David Carr, a Manxman who’d worked on the TT scoreboard as a Boy Scout and who knew how important names like Freddie Frith and Geoff Duke were; I don’t need to tell you he was keen, do I? David asked me to meet the Parent Teacher Association and explain what I wanted to do and in due course I sat in a classroom with men wearing neckties and ladies in twinsets. I didn’t feel I had much chance of winning such a conservative group over, but the Head Teacher had made it clear that he was in favour, and underneath the smiling charm he was a very determined man. “What will these people want to do - ride their motorbikes around the sports field?” they asked. No, they’d put their bikes on display, talk about them and admire one another’s handiwork in restoring them.

Did I want to have a licensed bar? Absolutely not! Sorry if I sound like a prude, but I have a long established and strong belief that riding bikes and drinking alcohol don’t mix, so no bar. How much food should we order? How many people would come? I had no idea, but local tradespeople really got behind the idea and we had bread rolls on a sale-or-return basis, milk and cream from Mawley Milk at no charge (the Robinson family are from Northern Ireland and had probably been tainted by watching the North West 200, bless ‘em) and if we needed more bacon we knew where the butcher’s back door was.

We got publicity in ‘Motor Cycle News’ and ‘Classic Bike’, where I did freelance work and had contacts, and in September 1984 we opened the gates and held our breath. They came in dozens and then 20s on Saturday, and business was pretty good. On Sunday the place was crazy, bikes all over the place, mums working in the kitchen running down the road to get more food supplies and a friendly atmosphere that killed any doubts they had. “Aren’t they nice. So polite, and most of them wanted wholemeal bread!” was a comment from the kitchen. We handed out trophies sponsored by local bike shops and whoever we could persuade to part with money, people said it was a good show and when the sums were done the Parent Teacher Association could hardly believe that we’d made £850. They were used to banking a £200 profit from a dinner and dance on a good evening; it was suggested that the show was the biggest earner ever run in the town, though I think that something of an over statement.

Whatever, the Borders Bike Show was a welcome addition to the local calendar and please would we do it again? Of course we would. It’s grown enormously since then, and today we fill two halls with bikes. The butcher gets an order for 70 lbs of bacon to start with and knows he may get a phone call early Sunday for some more. We park caravans and camper vans around the campus, we invite big names from the bike scene of yesteryear to come along, and on Saturday night 30 or more of us swell the numbers for a curry at the Balti Bar.

We’ve had some amazing bikes on show, the stuff of dreams that enthusiastic owners bring along for no payment, just to help the show have a buzz. We make enough money to afford a donation to a local charity every year; the best profit to date was about £5,500, but money is not what the weekend is about. If we make people happy and see them leaving with a smile and a ‘Thank You’, that’s the show’s future assured; if the day ever comes when making money is the major concern, I will regard it as a failure. What drives this show is enthusiasm. And not just from the hard core classic enthusiasts who want to show off their latest acquisition or restoration.

I can remember one mum who worked a Saturday night shift at the old folks nursing home on the High Street, went home for a shower and change of clothes, then came to the show and did a full day in the heat of the kitchen, feeding the hungry hordes. After years helping with every task going, Steve Todd moved to Derbyshire with his work, but came back every year to help; he’s still the backbone of the weekend. Bob Heath coming as Guest of Honour, refusing payment, and offering to bring his genuine ex-Mike Hailwood Honda-4 to the next show and firing it up. My missus sitting on the entrance every year, never seeing the prize giving until the 25th, when we acknowledged the invaluable work she’s done every year. The list of people goes on, but I must stop. I hope you’ll come to the Show and enjoy the weekend. We call it ‘The Friendly Show’ and long may it stay that way. 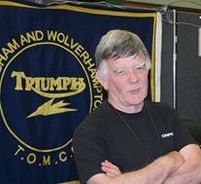